Djarra, dancing while I ride

I can enjoy a horse that is dancing next to me, completely free and happy. But Djarra had never done that when I was riding him.

Today was a beautiful day with sunshine and temperatures just above freezing. Our outdoor arena was perfect and an invitation for a ride. After some days with snow, ice and frozen grounds, some gymnastic work was in order.

I started quietly in walk with some circles, bending and going backwards. Then I asked slowly for more action without increasing the pace. Djarra took his time, but relaxed and was so soft to ride. He snorted softly and extended his stride. After this some trot with some small circles. He kept holding back what usually means he still holds his breath. Some extra bending with more action then help as was now also the case.

Then he sees something, but I do not see it. He raises his head and dances slowly below me but is totally relaxed and springy throughout his body. With some small circles I try to get his attention at work, but actually there is not something specific that draws his attention … he just keeps dancing in a totally relaxed gait. It really feels so precious! He has never done this before, so I ride around a bit longer and reward him extensively.

After years of being terrified of being ridden in an arena, just becomimg completely rigid, I was happy the last couple of years I could ride in an arena. Only, as free and happy as today, I have never had him while being ridden. What a present!

It must have looked a bit like this, but of course with me on top 😉 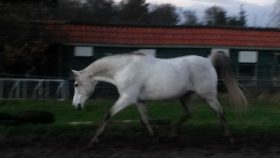 « Walk around the village
Some video’s: »