Working together, for the benefit of the horse

Last week showed how working together as professionals can really benefit the horse.

Chiropractor Emir Lervy of a Chiropractic Touch came to work with two horses at the Crosskennan Lane Animal Sanctuary.

First Stan, who had been on and of not quite sound. When I started out a few weeks ago he was so tense in his forehand and neck that he would not allow me to do any bodywork on him. Therefore I introduced him to the Sure Foot pads, which he really liked. These relaxed him enough for me to start gentle bodywork. And after a few times I had him walking in strong, relaxed big steps around me.

When Emir started to palpate him she immediately felt how tense his muscles were, but she could touch him and work with him. Something that, a couple of weeks ago, would have been a problem. We discussed his status and the work I would do to get him to use his body in a healthy way. Because just making him able to function properly does not mean a horse will do it, often they stick to their old ways and need help to find the “better” way to move.

Second was Darcy, who has not been handled a lot. But she is such a sweet but introverted girl. When I started out with her, she did not like her legs to be touched let alone picking her feet up. And she did not know what to do when I moved to her right side. With her I worked on building trust. Trust that I could stroke her legs and pick up her feet. That morning for the first time I could do small circles with both front feet.

Compared to Stan, who had a definite opinion about being treated, Darcy stood like a rock. First apprehensive but later you could see her relax under the hands of Emir. And we could see her body posture change, standing totally square behind with a strong back.

We had left her legs for last, it is a bonus if she could release them. First of Darcy’s right front leg. Picking up was no problem and with me holding her halter, helping her balance and telling how great she was doing. Emir could “work” her leg. Then she picked up Darcy’s left front leg, immediately there was a balance problem. We left it alone, as not to lose her confidence she gave us.

Also in her case we discussed her status, a fine strong stable horse. And the work in training that would help her build more strength. Learning her to balance on 3 feet will also be a training goal. 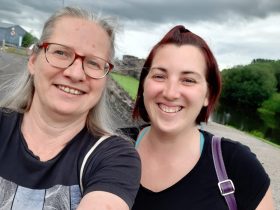 « My first approach
Having a conversation »