Ok, I have to admit I was a bit over the top, being super enthusiastic about how everything was going. Because running every day and then doing swimming in the sea as well was a bit too much. A week later I was totally drained and had to rest up.

Some basics, like the real training of the muscles takes place on the two rest days afterwards ….. Or that the swimming might feel totally easy but my muscles told me at night that “a lot of them had had a serious workout”!

So I did a week of resting as in no running or swimming! The following Saturday there was a 650 swim “Pickie to Pier” for the yearly vintage seaside revival festival. And guess what I did it in 18 minutes 😉 which is really good considering I had never before swam such a distance let alone in the sea with big waves! Next Monday we did the same interval training as the Monday before and this time I did great and got me some Strava awards!

Now I will be back on running 3 times a week: Monday the WPR training, a small run and a long run. Although I love the swimming I will keep that on once a week for now. See how this goes. You will read about it next time. 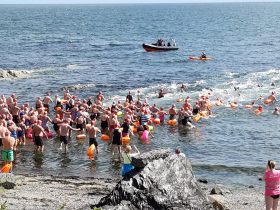